This may well sound like a lot of hype, something some Costa Rica ad agency just made up. But the fact is, it's true and it really means something.

The Happy Planet Index is a project of the New Economic Foundation which is "an independent think-and-do tank that inspires and demonstrates real economic well-being." 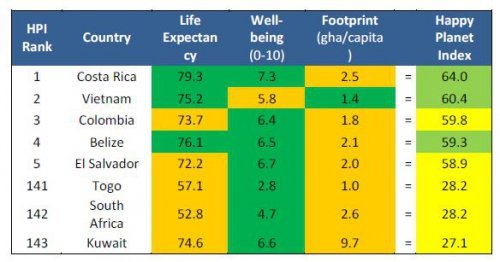 For the 2nd time Costa Rica has been listed as #1 on this list, which ranks 151 countries.

This New York Daily News article has this to say:

"The weather is warm, the beaches are sublime and people hate pollution - no wonder Costa RIcans are smiling."

The NEF drubbed America and the United Kingdom for its poor use of resources."

In 2010 AARP Magazine also gave Costa Rica high marks, listing Costa Rica at the top of their "Best Places To Retire Abroad". In the article the author stated:
"Costa Rica is where you go to live the lush life. It is lush with nature—misty rain forests, extraordinary wildlife, active volcanoes, and fabulous beaches—as well as such comforting amenities as malls, supermarkets, restaurants, museums, and social clubs. U.S. retirees have flocked here for years, drawn by its mild climate, its prosperity (relative to other Central American republics), its literacy rate, its health care, and, significantly, its stable government—with no army."

The article also pointed out the area where Rancho Silencio resides (near Magallanes, on the outskirts of San Ramon) as being one of the best areas to settle, stating:
"The outlying towns and villages of the Central Valley offer temperate, dry days and natural beauty, as well as the culture, hospitals, and shopping of nearby San Jose. (Regarding the weather, expats here like to brag that they can fine-tune their micro-climates by moving up and down the hills.)"

No wonder you are always hearing about Americans retiring to Costa Rica!

Why not retire in one of the happiest places on earth?

If you enjoyed our site please check out our social media!